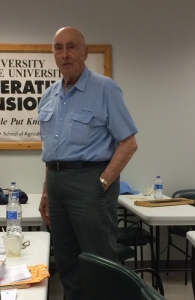 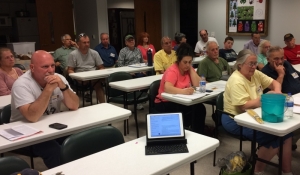 * The May ACBA meeting was held on May 11, 2017 at which time Bob Cole, certified Master Beekeeper by the Eastern Apicultural Society of North America, presented a program on bee swarms that included a riveting, hour long video which had many vignettes displaying the capture of swarms from various locations.

* The regular meeting was one of the ACBA's largest with 28 association officers and local beekeepers in attendance. Open/read minutes of the meeting here...

* After the meeting program concluded, several door prizes were awarded, as well as the recipient of the Nuc provided by the Hidden Happiness Bee Farm was selected, as follows:

- Doug Hayes won a copy of "First Lessons in Beekeeping" (the book most commonly used for bee classes) donated by Bob Cole.

- George Katsoudas and Doug Hart both won a pint of Harry Bee Healthy donated by past president Harry Galer.

* Thanks to everyone who participated by buying raffle tickets and supporting the ACBA.